In 1946 Mr Ronald William Craven joined Mr A. E. Smith in Partnership after working together for a number of years. 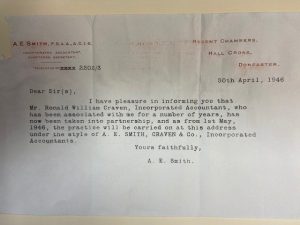 On the same anniversary 75 years later we are pleased to announce as of 30th April 2021, Claire Docherty will become a Salaried Partner after joining the firm in 2010. Mark Dickinson and Robert Hood have been promoted to Associate Status. Mark’s new role will focus on new client development and networking and Robert will support and lead across compliance areas of audit. I am sure you will join us in offering our congratulations to Claire, Mark and Robert and wish them continued success.

Use our handy news filters to find what you’re looking for quickly. Search by keyword, category or tag.